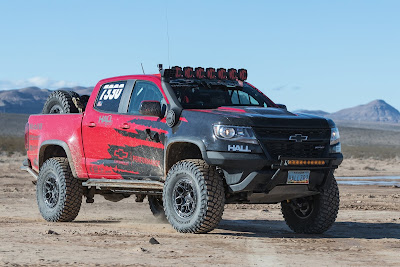 Production-based ZR2 has accumulated 3,275 race miles
in Best in the Desert Series

LAS VEGAS — Today the Colorado ZR2 will be competing in its third Best in the Desert’s General Tire Vegas to Reno race. Since the truck made its debut at the 2017 Vegas to Reno, the ZR2 has been piloted by Chad Hall of Hall Racing in 11 Best in the Desert races, logging 3,275 miles in some of the most challenging off-road conditions imaginable.

A total of 434 vehicles have competed in all 11 races in the Best in the Desert series since the ZR2’s race debut. As a testament to the grueling nature of off-road racing, the ZR2 is one of only four vehicles — fewer than 1% of total entrants — that completed each of these 11 competitions.

“Our goal with the Best in the Desert competition is to push the engineering and development of the Colorado platform in the most extreme conditions imaginable,” said Mark Dickens, chief engineer, Government Programs, Performance Variants, Parts, and Motorsports. “We’ve already learned things over the past two years that have shaped our off-road portfolio, including the performance parts and motorsports catalog, production vehicles and GM Defense projects.”

Not only has the ZR2 survived the challenges of the Best in the Desert series, but the Chevrolet and Hall Racing teams have found ways to make the truck more robust and efficient since its debut. The truck finished its first 2017 Vegas to Reno in 18 hours and 51 minutes. The following year, the ZR2 improved its finishing time by more than four hours to 14 hours and 34.5 minutes.

The production-based ZR2 is one of the only vehicles that competes in the stock 7300 class. It regularly beats the race times of a wide range of off-road vehicles — everything from dune buggies to modified Ford Raptors, Jeep Wranglers and trophy trucks in the more extreme and well-represented Class 6000 and 6100 classes.

World-renowned off-road racer and engineer Chad Hall received one of the first Colorado ZR2s ever built in May 2017, and he’s been running it ever since. His vehicle began life as a Red Hot Crew Cab ZR2 powered by a 3.6L V-6 engine paired with an eight-speed automatic transmission.

This vehicle was modified with prototype suspension and driveline parts that were developed into 15 factory race components now available to Colorado ZR2 customers. The truck has since been updated with the same production parts available through the Chevy performance catalog. This portfolio includes race-tuned versions of ZR2’s Multimatic Front and Rear Long Travel DSSV shocks with up to 15 percent more suspension travel in the front and 10 percent in the rear.

“In off-road racing, your speed comes from your suspension, not your engine. Usually, when you modify the suspension on a stock truck, the rest of the truck can’t keep up with it,” said Chad Hall. “However, the Colorado is such a great platform, everything seems to work at the same level. This is true even during off-road races, which are some of the most punishing miles you’ll ever put on a truck.”

Hall’s race truck was recently upgraded with ZR2 Bison skid plates on its engine, transmission, and differential as well as other American Expedition Vehicles Colorado accessories such as Crestone DualSport Beadlock wheels and a snorkel for air filtration while racing in dusty climates. For its third year, the ZR2 race truck also receives a new wrap that incorporates the GM Defense logo and additional HID KC HiLiTES to improve nighttime visibility.

Posted by Paradise Fleet & Commercial at 10:48 AM