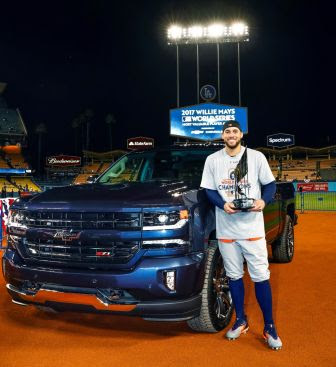 LOS ANGELES— The 2017 Willie Mays World Series Most Valuable Player, George Springer, was presented with a 2018 Chevrolet Silverado Centennial Edition pickup in recognition of his strong performance on the field as the Houston Astros won the first World Series championship in their franchise history.

Springer, the Astros centerfielder, went 11-for-29 with five home runs and seven RBI. He tied the record for the most home runs in a World Series, a feat achieved by only two other players – Reggie Jackson with the New York Yankees in 1977 and Chase Utley with the Philadelphia Phillies in 2009.

A media panel and online fan votes on MLB.com, the club sites and the MLB.com At Bat app helped determine the MVP Award winner. Earlier this year, Major League Baseball honored Hall of Famer Willie Mays by renaming the MVP award in recognition of his many contributions to the game.

“In a matchup of the two best teams in baseball, George Springer’s performance on the field tonight and throughout the World Series truly embodies the same ‘Never Give Up’ spirit that drives the Chevrolet team to win every day,” said Brian Sweeney, U.S. vice president of Chevrolet. “We are proud to recognize Springer’s tremendous efforts with the Willie Mays World Series MVP award and the 2018 Chevrolet Silverado Centennial Edition pickup.”

Chevrolet has been the Official Vehicle of Major League Baseball since 2005 and through its Chevrolet Youth Baseball program has helped raise more than $28 million to aid hometown teams over the last 10 years. Nearly 5.2 million young people in communities across the country have benefitted from the program, and more than 1,500 Chevrolet dealers are involved.

Chevrolet is also a proud sponsor of PLAY BALL, baseball’s collective effort to encourage young people and communities to participate in baseball- or softball-related activities, including formal leagues, events and casual forms of play.

Model year 2018 marks the 100th anniversary of the first production Chevrolet truck. A century and more than 85 million trucks later, Chevrolet has become one of the most recognizable brands in the world. The 2018 Silverado Centennial Edition features design elements inspired by Chevy Trucks throughout history, including a distinctive Centennial Blue paint color and exclusive heritage bowtie emblems and 100-year badges.

Founded in 1911 in Detroit, Chevrolet is now one of the world's largest car brands, doing business in more than 100 countries and selling more than 4.0 million cars and trucks a year. Chevrolet provides customers with fuel-efficient vehicles that feature engaging performance, design that makes the heart beat, passive and active safety features and easy-to-use technology, all at a value. More information on Chevrolet models can be found at www.chevrolet.com.
Posted by Paradise Fleet & Commercial at 8:30 AM