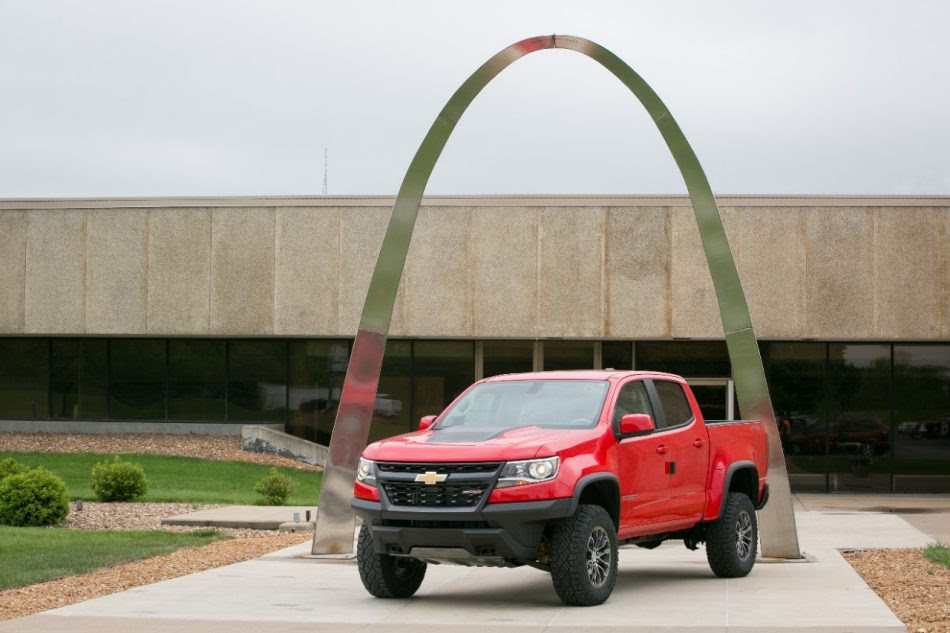 , Mo. — Initial deliveries of the highly anticipated 2017 Chevrolet Colorado ZR2 pickup have begun. The first production trucks shipped from the Wentzville Assembly Center 40 miles west of St. Louis, Missouri, on Friday. Customers who placed early orders will begin receiving their trucks in May.

Among this first batch of vehicles is a Red Hot Crew Cab equipped with the 3.6L V-6 engine and eight-speed automatic transmission to be raced by Chad Hall of Hall Racing. This truck will make its competition debut in August in the Best in the Desert race series.

“The Colorado ZR2 really caught our attention with its built-in versatility and the high-speed, off-road potential of the Multimatic DSSV dampers,” said Hall. “We love the ground clearance, ride stability, departure and breakover angles of the ZR2, and the inherent light weight and maneuverability of its midsize package. It should be a great platform for us to build an off-road desert-racing truck.”

Following its modifications, the truck will be used as a development vehicle in races at this year’s Best in the Desert series, including the General Tire Vegas to Reno presented by FOX on August 18 and 19 and the VT Construction Tonopah 250 presented by Polaris on October 19-22.

These events will help provide an excellent validation test of Chevrolet Performance Parts being developed for Colorado owners looking to customize their vehicles for improved off-road performance.

“Producing the Colorado midsize pickup has been a great honor, not to mention great business for the Wentzville plant,” said Satya Veerapaneni, plant manager, GM Wentzville Assembly Center. “ZR2 helps to take the Colorado nameplate to the next level, and we’re thrilled to be delivering one of the very first of these trucks to Hall Racing. We look forward to following its performance at upcoming races throughout 2017.”

The ZR2 is effectively a segment of one, combining the nimbleness and maneuverability of a midsize pickup with a host of new off-road features and the most off-road technology of any vehicle in its segment.

ZR2 is officially on sale in dealerships nationwide, joining the award-winning Colorado midsize pickup family. The standard Colorado was recently updated for the 2017 model year with an all-new V-6 engine and a class-exclusive eight-speed automatic transmission.
As with all Chevrolet trucks, the Colorado ZR2 is built with durability in mind, including a fully boxed frame, roll-formed high-strength steel bed and Duralife brake rotors.