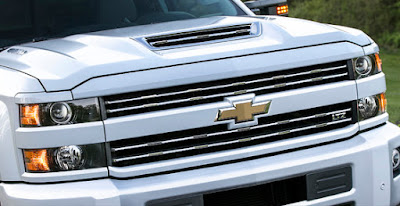 Just as we saw on the 2017 GMC Sierra 2500, the new 2017 Chevy Silverado heavy-duties will receive a new hood design created to provide more and cooler intake air for the diesel engine.

Currently, both the 2500 and 3500 models offer a 6.6-liter 32-valve overhead V-8 turbo-diesel engine, but we're guessing it will be significantly upgraded for the 2017 model year, thus requiring the need for extra air for cooling. Gas engine models will have the intake-less hood style.

Basically, the new air inlet on the top of the hood acts as a second ducted air intake for the engine (there's also one on the grille), pulling in cooler air as needed. Additionally, when the pickup truck is moving at higher speeds, the new inlet pushes more air into the system chambers before entering the block for combustion, potentially delivering denser air into the intake — all for the sake of more power and efficiency. This new intake system also includes an upgraded separator system designed to keep moisture, in the form of droplets or mist (and snow), from getting to the filter.

From its inception, GM's Duramax diesel engine has had intake issues, which we noted in our first heavy-duty pickup comparison test. At the time, a GM engineering representative said the company was aware of the intake vibrations created during heavy-hauling situations, and it was in the process of providing an intake fix. Subsequent iterations of the intake would change significantly, GM said, in the years to come. So here we are.

We reached out to GM representatives to find out if any further structural changes were made to the heavy-duty models — such as receiving the front-end redesign the Chevrolet Silverado and GMC Sierra half-tons — did but did not get a response.