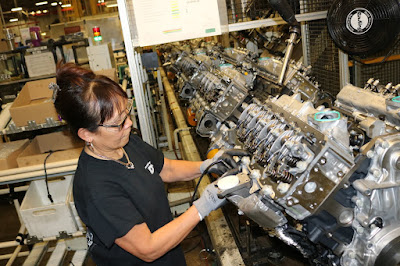 DETROIT — General Motors, which fields the industry’s most expansive portfolio of diesel-powered passenger cars, crossovers, pickups and vans, confirmed today that Chevrolet’s highly-anticipated, all-new Class 4/5 commercial truck will be powered by a Duramax engine and Allison transmission – a legendary combination that has powered close to two million trucks.

Chevrolet made the announcement today at The Work Truck Show 2017, and confirmed the truck is on track to launch in 2018. It is being jointly developed by Chevrolet and Navistar.

“Our new Chevrolet medium-duty will be the flagship of our truck portfolio for fleet and commercial customers, and we believe the strength of Duramax/Allison powertrain combination will be able to tackle various jobs – from general contracting to urban delivery to bucket loaders and wreckers,” John Schwegman, U.S. director of Commercial Product and Medium Duty for GM Fleet said. “To win customers, we’re marshalling the best diesel and heavy-duty transmission engineers in the world and offering more choices than any other manufacturer.”

Allison Transmission, based in Indianapolis, is the largest designer, developer, manufacturer and distributor of medium- and heavy-duty fully automatic transmissions, and is a leader in hybrid-propulsion systems. Their designs have been used in a variety of applications, including refuse, construction, fire, distribution, bus, motorhomes, defense and energy. They have helped drive Chevrolet’s hardest-working trucks since the 1950s.

The first Duramax diesel engines were introduced in Chevrolet and GMC trucks in 2001, and they have accumulated more than 100 billion miles of real-world experience. Since then, the engines have been continually refined, introducing first-in-class technologies such as aluminum cylinder heads, the quick-start system and the Venturi Jet Drive Oil separator.

Technical specifications for Chevrolet’s new medium-duty truck, including cab and frame dimensions, horsepower and torque, GAWR, GVWR, payload and other ratings, will be released close to launch.

• The 2017 Silverado HD offers a newly-redesigned Duramax 6.6-liter V-8 turbo-diesel, the most powerful engine ever installed in a GM pickup truck with 910 lb./ft. of torque and a class-leading 445 hp.
• The Cruze sedan and hatchback, which offer up to an EPA-estimated highway mileage of 52 mpg — the highest highway fuel economy of any non-hybrid/non-EV in America and an estimated range of up to 702 highway miles.
• The Equinox compact crossover, available this summer, is expected to achieve a GM-estimated 40 mpg on the highway (EPA estimates are not yet available).
• The Colorado mid-size pickup, which is the industry’s most fuel-efficient pickup, according to the EPA’s fueleconomy.gov website.
• The Express full-size van, which is available in both passenger and cargo variants, with either the short or long wheelbase.
• The Low Cab Forward commercial truck, which offers two turbodiesel engines. A 3.0-liter engine paired with a 6-speed double overdrive transmission is available in 3500HD models.  Larger 4500HD, 4500XD, 5500HD and 6500XD models are available with a 5.2L engine.