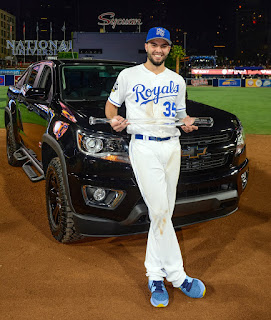 Chevrolet, America’s most awarded car company, gave Hosmer who went 2-for-3 in the contest with a home run, two runs batted in and a run scored, his choice between the 50th Anniversary Edition Camaro SS Convertible and a Colorado Diesel Midnight Edition.

This is Hosmer’s first All-Star MVP award and the first for a Kansas City Royal since Bo Jackson in 1989.

“Hosmer’s spectacular on-field performance tonight demonstrates to all baseball fans and especially our kids that hard work, determination and teamwork is what wins, and that is why Chevrolet is proud to present the MVP award,” said Brian Sweeney, U.S. vice president of Chevrolet.

Chevrolet Youth Baseball program has helped raise more than $28 million to aid hometown teams over the last 10 years. Nearly 5.2 million young people in communities across the country have benefitted from the program, and more than 1,500 Chevrolet dealers are involved.

Additionally, through Chevrolet Youth Baseball, more than 90,000 equipment kits have been donated to teams around the country, nearly 11,000 parks have been renovated and more than 111,000 children received complimentary instruction on baseball fundamentals.

“At Chevrolet, we appreciate the power of play and the positive effect that it has on our kids,” said Sweeney. “That positive effect on our kids and ultimately on our communities is why it is so important to us and our Chevrolet dealers to support baseball at every level.”
During the afternoon’s Red Carpet Parade, Hosmer, along with his All-Star Game teammates from both the American and National Leagues, signed a 50th Anniversary Edition Camaro hood that will be auctioned in the coming days on MLB.com. The proceeds of that auction will support the MLB-MLBPA Youth Development Foundation.

Founded in 1911 in Detroit, Chevrolet is now one of the world's largest car brands, doing business in more than 115 countries and selling more than 4.0 million cars and trucks a year. Chevrolet provides customers with fuel-efficient vehicles that feature engaging performance, design that makes the heart beat, passive and active safety features and easy-to-use technology, all at a value. More information on Chevrolet models can be found at www.chevrolet.com.
Posted by Paradise Fleet & Commercial at 8:30 AM