Chevrolet has sold
1.4 million vehicles with 4G LTE,
more than the rest of the industry, combined 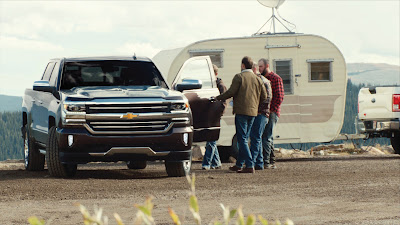 DETROIT – Chevrolet has sold more than 1.4 million vehicles with 4G LTE connectivity since June 2014, exceeding the total sold by of the rest of the industry combined. That number includes more than 500,000 Chevrolet Silverado, Silverado HD and Colorado trucks.

On Thursday, Chevrolet will introduce a new television spot showcasing the benefits of OnStar 4G LTE connectivity on Silverado. “Mobile Office” continues the “Real People, Not Actors” campaign, offering customers a choice between two mobile offices – a Silverado with OnStar 4G LTE or a competitive vehicle without. The creative breaks from the traditional 30-second format by delivering the primary story in a 45-second piece, and a separate 15-second piece that reinforces the message. A long-form version of Mobile Office, as well as two other new Silverado videos, will appear on Chevrolet.com.

“The spot illustrates just one aspect of the connectivity Chevrolet offers our owners,” said Paul Edwards, U.S. vice president of Chevrolet Marketing. “Based on usage rates for features such as OnStar, 4G LTE, and RemoteLink, Chevrolet’s technologies deliver real-world benefits for our customers – and are a competitive advantage for our brand.”

Chevrolet is the only automaker to offer 4G LTE connectivity across its full-range of retail cars, trucks and crossovers. In addition, Chevrolet provides a wide range of technology offerings that keep drivers connected to their families, friends and vehicles no matter where they go. With millions of connected vehicles on the road, Chevrolet has gained valuable insights into consumer demand and adoption of these features. A few examples include:

•    Chevrolet owners have consumed more than 1.4 million GB of data since its launch in June 2014. This is equivalent to*:
o    1.5 million hours of streaming HD video OR
o    48 million hours of streaming music OR
o    2.9 billion social media posts with photos
•    In 2015, Chevrolet owners logged more than 5 million interactions with the OnStar RemoteLink app every month on average
o    Chevrolet Volt drivers are most likely to use the app
•    Chevrolet drivers ask for directions through OnStar approximately two million times every month
•    Owners of Chevrolet vehicles are using OnStar an average of 3,000 times every month for Good Samaritan calls.

Chevrolet has long history of introducing innovative technologies to its customers. For nearly two decades, the brand has provided a connection to the vehicle through OnStar. It was also the first brand to introduce Siri Eyes Free compatibility, and for the 2016 model year it will offer both Apple CarPlay and Android Auto compatibility across the widest range of models in the industry.

This history of innovation includes being the first in the industry to offer technologies such as Teen Driver, a built-in system that lets parents view on a display how their teenager drove the vehicle. Valet Mode and Performance Data Recorder, also industry exclusives, allow Corvette owners to unlock the interior storage, disable the infotainment system and record video and vehicle data when the system is active.

More than 99 percent of people who bought a vehicle equipped with OnStar 4G LTE have taken advantage of the free trial of 4G LTE data and signed up for five years of connectivity which includes access to OnStar RemoteLink, monthly Vehicle Diagnostic Reports and Dealer Maintenance Notifications from OnStar.
*Data is quantified according to AT&T’s Data Legend. One minute of streaming music (standard) is 500KB (30 MB/hour), one minute of streaming video (HD) is 15MB (900MB/hour) and one social media post with photo 500KB.

About Chevrolet
Founded in 1911 in Detroit, Chevrolet is now one of the world's largest car brands, doing business in more than 115 countries and selling around 4.8 million cars and trucks a year. Chevrolet provides customers with fuel-efficient vehicles that feature engaging performance, design that makes the heart beat, passive and active safety features and easy-to-use technology, all at a value. More information on Chevrolet models can be found at www.chevrolet.com